With our combined knowledge and experience of farming and metal, along with vigorous R&D, Stiletto was developed to become a seeding system of the highest quality, designed for the Australian conditions.

Our seeding system beds the seed in the most efficient way. With care and accuracy like seeding by hand.

” We are the producers of a state of the art seeding system that offers advantages the others cannot. “

THE STILETTO SEEDING SYSTEM was first developed in the 2004 season which led to the manufacture of 500 units.

In 2005 the new units were released to various farmers as well as being outfitted to 1 of 3 60 ft John Deere 1820 air hoe drills used to sow a portion of Stuart’s 14,000 ha program as part of a large scale R&D program comparing it to one of the best regarded systems of the day and ensuring there were no fatal flaws.

2006 we brought in our second generation adapters which rectified some minor faults and marked the start of our commercial sales. At the end of the 2006 season a local farmer decided to give the system a go, and so marked our first official sale of the system.

2007 the faith that our first client had placed in us had paid off and their praises were gaining us momentum as more farmers heard and saw the benefits.

2008 by the start of the season we had gained another 20 clients and by the end of the year we had sold out all of our stock and gained a further 30 clients.

2009 was a productive year that saw the introduction of 18mm points and the UNI series of points and fertiliser adapters specifically designed for flat mount bars, the conception of the Hooka point plus the contour drill and concord leg adapters.

2010 conception of the REDDOG 3 wing and release of thecontour drill and concord leg adapters and our revolutionary Hooka point combining the easy pulling of a 45° point with the soil throw characteristics of a 35° point.

2012 saw the release of the REDDOG 4 wing that allows farmers to remain on 12 inch spacing for trash flow and still maintain row competition to reduce weed populations. 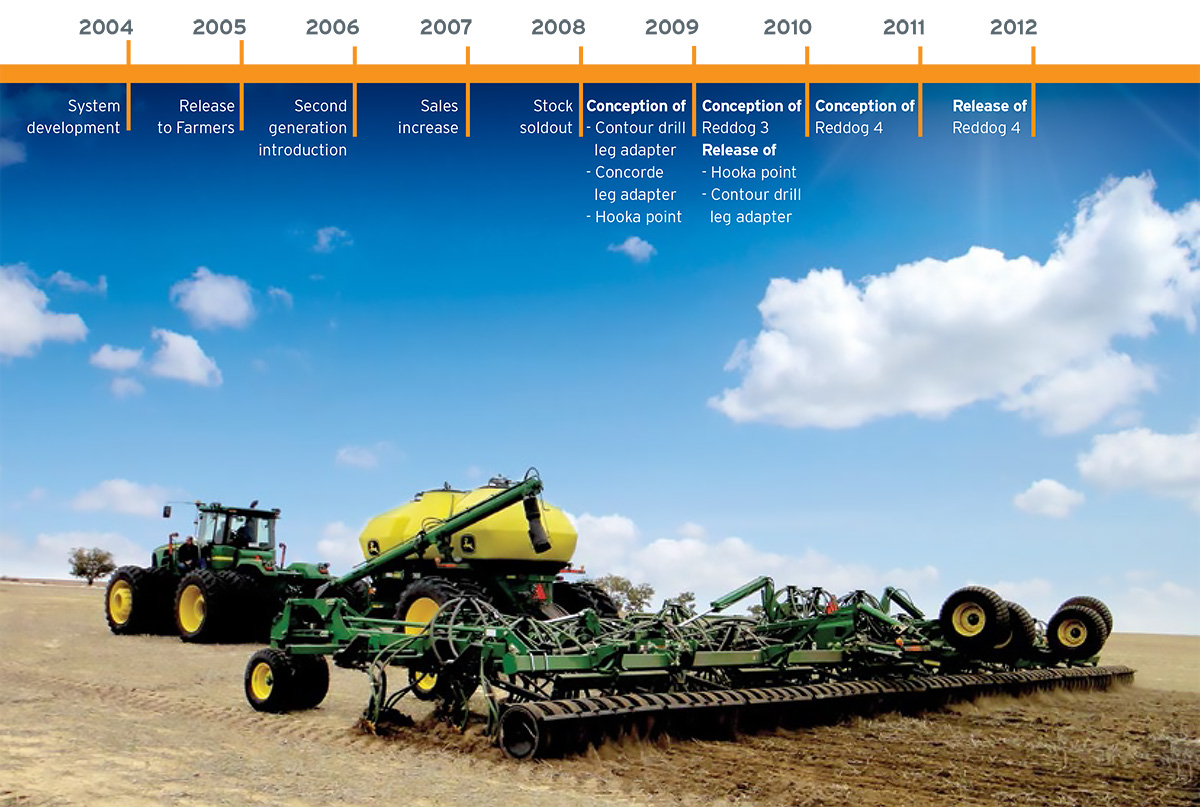